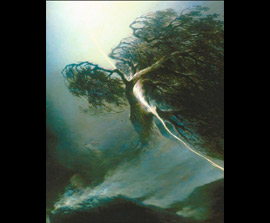 Disappearer is a Portuguese project of Pedro Coelho Pereira (all instruments) and the Basement Dweller Choir (vocals/vocoder), that has been active since 2012 (but making separately roughly since 2008).
The latest release – and self-titled record – is an album that sounds something like shoegaze/postpunk meets stoner/doom metal on a track and post-rock meets black metal (atmospherics) on another. It can be hard to properly categorize as its subjective appeal so far, has been quite diverse.
Although it reminds some people of a lot of stuff they like (or hate), at the same time it ends up not reminding them of any other specific act.
To the traditional rock crowd it may sound like if Pink Floyd and Black Sabbath had a love affair with Blue Ã–yster Cult and a bastard child (that they didnâ€™t feel too proud about) was born and named â€œdÃ¯sappearerâ€.