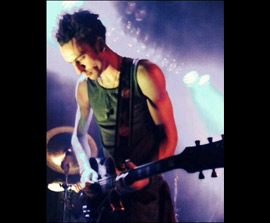 The solo careers of vocalist and guitarist Andrew, drummer Daniel and bass player Mitch collided on Londonâ€™s vibrant music scene creating Immigrants. Impromptu jams led effortlessly into songwriting sessions inspired by shared influences such as Faith No More, Queens Of The Stone Age, Nirvana, Soundgarden and Barkmarket. Andrew is the creative force behind the band, taking song ideas into rehearsals for the band to expand upon. Immigrantsâ€™ songwriting process is ultimately very collaborative though; Andrewâ€™s initial ideas develop into fully formed compositions with each band member writing their own parts and exerting their influence over the direction, sound and arrangement.

The band are bound by a common anger directed against broad scale social issues such as inequality, war and oppression, though they use this anger as an energy, channelling their love for music into efforts to turn negatives into positives and celebrating freedom of expression. Having already gigged extensively in London, Immigrants are ready to take their music to a larger audience, ultimately seeing themselves touring extensively and connecting with people who share their worldview, passion for life and desire to make positive changes wherever they can.