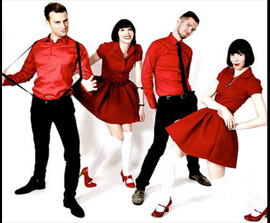 Tall Poppies are eccentric indie-pop four piece fronted by identical twin sister songstresses Susan and Catherine on vocals, bass and guitar with Diarmuid pulling at heart strings on violin and Doug injecting the energy and danceability on drums.

The twins named the band Tall Poppies soon after emigrating from their hometown, Perth, the most isolated city in the world. Having been listening to British alternative acts such as The Smiths, Kate Bush, David Bowie and Pulp, the pair dreamed of moving to the musical centre of the world and began writing their own distinct indie-pop tunes, matching catchy melodies with luscious intertwining harmonies.

Songs are drafted over cups of tea and chocolate biscuits during gossip sessions about men, friends, the latest novel and the dramas of working life. Snippets of sisterly chat often bloom into songs as guitars lie in laps dusted with chocolate crumbs. Lyrically they tell stories of the everyday and the unusual, the melancholic and comical. The twins met Diarmuid in London and it was not long before his graceful string lines accompanied the entire set, Doug Fink (formerly of Noah and the Whale) joined in adding more flare and completing the sound with his lively beats.

The band are fiercely DIY, having recorded and released their own material and produced many quirky video clips to accompany them.

‘High Time’ EP was released in Autumn 2015 and they have been touring up and down the UK including numerous UK festivals such as 2000 trees, Hay on Wye, Ashford Create with repeat bookings at east London’s cult vintage venue Paper Dress and an appearance at London Fashion Week.

‘Heart Palpitations’ was released from the EP High Time. The video was put together one weekend when Catherine had some extra red fabric lying around.

‘Cat Got Your Tongue’ is the latest offering, recorded with producer Paul Tipler (Elastica, The Horrors) in the depths of South London. It was launched on 29th January with a sold out launch party at Servant Jazz Quarters to boot.