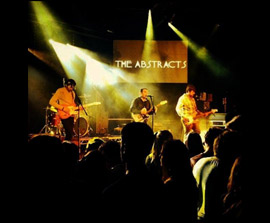 The Abstracts are a four-piece Indie/Rock outfit based in Cambridge. The band was initially formed in 2007 and has been subject to many line up changes over the years but now consists of Felix Morgan (Vocals and Guitar), Ben Taylor (Guitar and Vocals) Ben Nunn (Bass and Vocals) and Mark Thomson (Drums). Being influenced by a range of bands such as The Libertines, Green Day and Led Zeppelin The Abstracts’ music is inevitably an eclectic mix of jangly guitars, predominant bass lines and pulsating drum beats. The band’s live shows are an energetic and dynamic mix of both original material and some well known covers, which never fails to please the audience. The Abstracts’ first EP, Calling Out for Strangers, was released in January 2010 and the band is currently working on new material to take into the recording studio.

Sheffield Music Scene – “This is an incredibly focused record and the quality of the music reflects this. If The Abstracts are to set ‘Calling Out for Strangers’ as a bar that they intend to top in the future, then bright things are definitely ahead of them”

Promoted by Tim Willett at Off The Chart Promotions