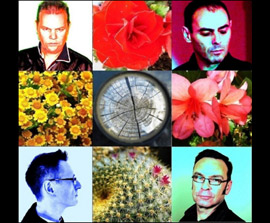 Edinburgh based outfit, The Cathode Ray released their long-awaited eponymous debut album on April 2nd 2012 through Stereogram Recordings to high critical acclaim. It is available on download format through all the usual outlets, and on CD through SuperD distribution, Amazon, CD Universe and selected independent record shops. The album featured high in the end of year roundups on the Manic Pop Thrills, Penny Black Music and The Sound Project websites. The single â€œDispersalâ€ was Track Of The Month in April 2012 on the influential Janice Forsyth Show on BBC Radio Scotland.
Originally based on a loose concept of forging late 70â€™s New York, with late 70â€™s Manchester, The Cathode Ray started life in 2006, initially as a song-writing collaboration between Jeremy Thoms and Paul Haig. However, the songs written were swift to adopt their own unique stamp and personality.
Adding 60â€™s garage, soundtracks, glam rock, northern soul, disco and psyche to the palette, recording sessions ensued, with ex-Bluebells and TV21 bassist Neil Baldwin, plus drummer/percussionist David Mack completing the line-up.
A one off double ‘A’ sided single entitled “Whatâ€™s It All About?”/”Mind” was released in late 2006 on Pronoia Records. It received extensive radio play, and was hailed Single Of The Year by Radio Clyde DJ and Sunday Mail columnist Billy Sloan in his round up of 2006.
A second single, “Slipping Away”, was released to great critical acclaim in April 2009, this time on Re-Action Recordings. The esteemed journalist Paul Lester proclaimed it Single of the Year (so far) in an enthusiastic piece in The Guardian. A revised version (with Thoms on lead vocals) appears on the debut album.
Just prior to the release of that single, Paul Haig quit the project. With Thoms assuming all lead vocal and song-writing duties, former Scars/Mike Scott accomplice Steve Fraser joined on lead guitar and backing vocals in 2009.
Writing and recording sessions for the album continued with the new line-up throughout 2010 â€“ 2011 at Gold Star Studios, the bandâ€™s recording and rehearsal base in Fife. 2010 also saw The Cathode Ray making their live debut with well received shows in Edinburgh and Glasgow. They have since been building up a solid live reputation with more gigs in and around Scotland including an appearance at last yearâ€™s Wickerman Festival.
Three tracks, â€œTrainâ€, â€œAroundâ€ and â€œDispersalâ€ have been lifted from the album as singles to much acclaim and worldwide radio exposure.