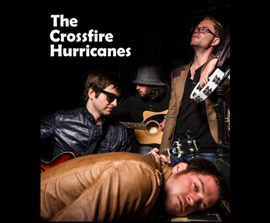 Influenced by bands such as Led Zeppelin, Black Rebel Motorcycle Club, The Black keys, and Pearl Jam, The Crossfire Hurricanes have defined their own style of blues infused Rock&Roll, laden with heavy guitar riffs and punchy vocals. In live performance the band mix an onstage presence of professionalism and spontaneity which exploded them onto the local music scene and saw them gain popularity through debut gigs in Belfast, Dublin, and selected venues throughout the UK. The online release of their debut single THE DEVIANT made waves throughout the UK and received plays on over 60 Independent radio stations nationwide, at the same time showcasing exactly what The Crossfire Hurricanes do best