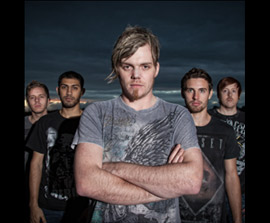 The Raven Age are a melodic metal band from London UK. The band was established in 2009 when founding members and guitarists, Dan Wright and George Harris began developing their vision of a band that combines contemporary heavy music with powerful melodic vocals to create a unique and epic sound. With plenty of material written, they took on Bassist Matt Cox in 2012 and completed the line up in 2013 with Vocalist Michael Burrough and Drummer Jai Patel joining.
.
Since becoming an active band, The Raven Age have been extremely busy gigging, mainly in and around the London area. They have recorded and released their debut self titled EP with it bringing them success in shooting to number 1 in the Amazon Hot New Releases Chart and climbing to number 16 in the Top 100 best sellers in Rock & Metal Chart on Amazon. This is remarkable considering that this has all been based on a word-of-mouth loyal growing fan base, as so far the band have done absolutely no press or promotion whatsoever and released it totally self funded without any label. See number 1 chart position here.
.
Highlights for this year have been opening the Satellite Stage at Sonisphere Festival, Knebworth coinciding with the release of their EP. This was closely followed by a tour including UK and European dates, concluded by a main stage slot at this years Moto Clube De Faro Festival, Portugal.
.
Now, the focus for The Raven Age is their first full length album which is well underway and due for release in 2015.