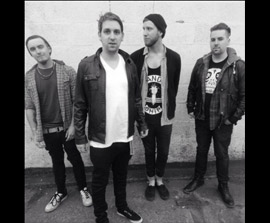 The Undivided formed in 2009 and since then have been making waves across the South Wales music scene and beyond with their anthemic brand of indie rock. Hailing from the South Wales valleys, they have gained a reputation as a blistering live act, delivering passionate performances that have swelled the ranks of their growing and dedicated fanbase.

Over the last couple of years they have gigged extensively over the UK, supported bands such as Ash and Excerts, played live sessions for BBC Wales and received great reviews for their live shows and 2011 EP ‘Machinesâ€

Second EP â€œSafetyâ€ was released the tail end of 2011 and 2012 shaped up to be a big year for the band with high aspirations. They recorded their EP ‘Safety’ at Monnow Valley studios with Tom Manning at the helm and released to resoundingly strong reviews from sources such as Rock Sound, Kerrang and Big Cheese as well as video and radio play from NME, XFM and Kerrang TV. This prompted the band to be invited to play Merthyr Rock 2012 along with bands such as Razorlight and Kids In Glass Houses.

Now under new Management and not a band to slow down, 2013 saw them invited to showcase at Focus Wales, Canadaâ€™s Indie week in Dublin, and Pontyâ€™s Big Weekend Fringe Event. They’re back writing in the studio working with Producer Romesh Dodangoda (known for working with Kids In Glass Houses, The Blackout, Funeral for a friend..) on the forthcoming album set for release March 2014.

They have been awarded funding from the Welsh Arts Council to support the release of the Album. A taster single was released on October 7th 2013 as they play their first showcase at Norwich, Sound and Vision, now already receiving airplay from BBC Radio1 Introducing, Nation Radio (Wales), Team Rock Radio and TBFM plus a number of other regional and online stations. As well as the Single making its way onto Big Cheese Magazine covermount CD October â€™13 edition. This is a band thatâ€™s on its way and theres no stopping!