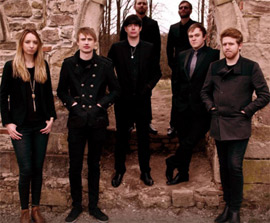 Abel Raise The Cain are an alternative indie Rock band from the Northeast, they were formed in mid-2012 and were brought together by a mutual respect for the same genres of music, Atmospheric/Epic/ Indie Soundscapes, influenced by such bands as Arcade Fire, Sigur Ros, The Editors & Coldplay, Abel Raise The Cain aspire to create & mould their own Epic sound to reach people in the same way .

They spend their time, creating wall of sound, Euphoric, indie rock/pop songs, the first two of which were released on December 15th 2012 to widespread critical acclaim as part of a double “A” sided single named â€œToo Late -The Promiseâ€. Both singles have received repeated airplay on radio stations across the U.K, including regular plays on BBC Introducing and “Too Late” has been play listed on Brazilian National Radio & featured by channel 4 on A primetime television program. They are currently working on their debut E.P named ‘For Strangers Only’ which will be available to buy in Sep.