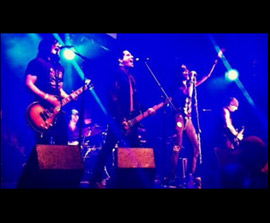 Los Angeles hard rockers Blacklist Union are back with their forth CD entitled â€˜Back To Momo!â€™ Tony West and Todd Youth, two of rock nâ€™ rollâ€™s most controversial outlaws in 2015, wrote 13 blistering tracks for the CD. You are guaranteed inspiration with this brand of street rock with songs like â€œAlive N Well Smack in the Middle of Hell,â€ â€œSuperjaded,â€ and â€œEvil Eye.â€ Hailed worldwide as the next big rock band, Blacklist Union are clearly on their way from the street to the elite.
Formed in 2004 by frontman Tony West, Blacklist Union released their debut â€˜After The Mourningâ€™ in April of 2006, which was met by critical acclaim all across the globe. From Memphis to Melbourne to Louisiana to London, Blacklist Union instantly made a mark throughout the rock nâ€™ roll underground. Their follow-up in 2008 â€˜Breakinâ€™ Bread With The Devilâ€™ with tracks including the title track, along with â€œSixty-Five Steps Awayâ€ and â€œWicked Love Song,â€ received the same amount of critical acclaim and put them on the map in the rock nâ€™ roll world yet again. The bandâ€™s third full-length CD entitled, â€œTil Death Do Us Partâ€ was released in 2012 and features amazing tracks including â€œAlabama Slammer,â€ â€œDigginâ€™ 4 Goldâ€ was received yet with the highest ratings and reviews in the press. Blacklist Union are getting ready to release their fourth CD, â€˜Back to Momo,â€™ which will without a doubt be received with the same level of enthusiasm and will certainly be exposing them to a larger audience around the world.
Blacklist Union have toured nationally receiving five star reviews from music industry magazines, fanzines, webzines, and has a continuously growing fan base both domestically and internationally. With all of their hard work and perseverance, Blacklist Union are a true rock nâ€™ roll band that continuously push themselves to the limit in every aspect of their music. Singer/songwriter Tony West tackles real life situations that affect each and every one of us in one form or another. From character assassination, to name dropping, addictions, sexual innuendos, romance, friendships, birth, death and living on the edge of destruction is just a fraction of what is touched on in their music.
Blacklist Union recently signed with Doug Goldstein and When Pigs Fly Entertainment. The former Guns nâ€™ Roses manager and current Blacklist Union manager has said that â€˜Back to Momoâ€™ is â€œThe best record that heâ€™s heard since â€˜Appetite For Destructionâ€™ and that â€œTony West is the hardest working frontman he knows.â€ Keep a lookout for the first single and video for â€œAlive N Well Smack in the Middle of Hellâ€ coming soon!