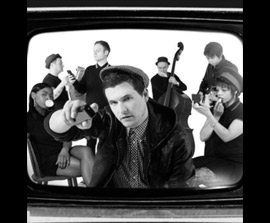 Already a big deal with a dedicated following on the European circuit, Buster Shuffle built their reputation touring the UK with the likes of The Holloways, The Wombats, Goldie Lookin’ Chain and Chas ‘n’ Dave, before signing to EMI offshoot People Like You.

Sold-out shows in practically every major European city followed (from Berlin to Vienna and every letter in between), as well as high-profile festival slots alongside the likes of Lee Scratch Perry in Germany, Frank Turner in Czechoslovakia and massive arena shows in Italy with Drop Kick Murphys.

Since then, UK supports with Madness, The Blockheads, The Rifles and Shed Seven, along with packed out in-store Fred Perry subculture gigs have further enhanced the band’s burgeoning reputation.

In 2013, Buster Shuffle conquered yet more new territories, playing to huge crowds at festivals in France and stepping up a level to world famous festivals including Dour in Belgium and Fusion in Germany, as well Wickerman and Rebellion in the UK.

Buster Shuffle is the virtuoso, creative behemoth, Jet Baker on piano and lead vocals, the best rhythm section you could hope to find in the shape of Terry Mascall and Tim Connell on drums and double bass, James Stickley, giving heart and soul, on guitar alongside Pete Oag on keyboards and vocals and backing singer Carrie Griffiths.