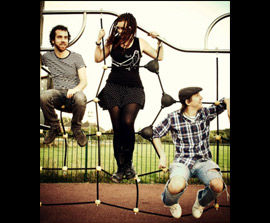 By Jupiter are a three-piece alternative rock band formed in 2013 and based in Cardiff. The band consists of singer-guitarist Curtis Thorpe, bassist Sarah Tatum and drummer Luke Dwyer.

Sarah & Curtis had previously played together in a band in North Wales before moving to Cardiff in 2012.

By Jupiter released their debut EP in 2014, which can be downloaded here: http://by-jupiter.bandcamp.com/

The band are now writing new material and touring in early 2015.