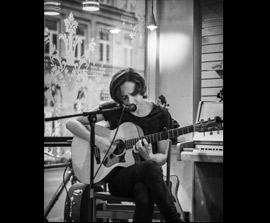 Melodic, intimate , alternative, melancholic and rawâ€”some of the terms used to describe the music of Calming River.

The name may conjure relaxation and tranquility, but there has always been a latent, opposing flow of tension and strifeâ€”an ambiguity and alienation emanating from the within. One could attribute this to those who inspired the music; the folk musicians of the 60â€™s, the delta bluesmen such as the haunting Skip James, and the early nineties Seattle alternative music scene.

2014 debut EP â€˜Afflict and Redeemâ€™ portrays 7 songs recorded in Denmark between June 2013 and April 2014. The record features DJ Alvaro Takt on violin, with Fernando Teijeiro and Luke Gibbs on drums.Together the musicians complement the finger-picking style of guitarist and songwriter Joshua Brain. The album often delves into darkened watersâ€”confronting human conflict, despondency and togetherness. The album name is taken from the track â€˜The Dirtâ€™, and based upon book â€˜Dirtâ€™, written by one of the artistâ€™s favorite authors, namely David Vann.

In 2015 the artist releases four-track EP â€˜The Ones That We Left Behindâ€™. Again working with DJ Takt and Teigeiro, Joshua is also accompanied by viola and flute. The record further delves into the dark confines of humanityâ€”conjuring an atmospheric and apocalyptic set of acoustic songs.