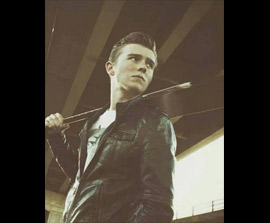 Chay Snowdon was born in Plymouth in ’97 and after spending his early years living in Spain returned to Plymouth with a passion for music.
Being totally self taught Chay is a prolific song writer finding it difficult to categorise his music and so is looking forward to getting peoples opinions, in his words “I think I sound like a mix between Arctic Monkeys, Kings Of Leon and Elvis Presley if that’s at all possible. When I was in Spain I spent hours listening to Rock n Roll tracks from the 50’s and 60’s, it’s hard to shake that influence off once its in there!”

Currently performing his material in as many venues as possible around the south west Chay is building his own following of fans and is looking to increase the size of his gigs and develop his profile. “I have recently recorded two tracks in Berwick studios with session musicians which I am very proud of and very excited about, hopefully I will be able to bring this to my live shows in the not to distant future.”