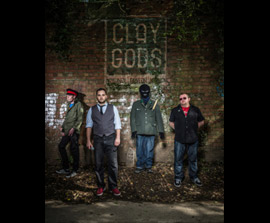 Clay Gods are a four-piece rock band from Gloucestershire, who play original songs and the occasional cover.
.
Formed in early 2013, their music blends the power and dynamics of rock with the melody of pop, and adds proper lyrics, which are unafraid to look at the darker side of life.
.
A blistering live act they create an on-stage hurricane of drums, guitar, energy and emotion, and have already played prestigious venues such as The Fleece and The Exchange in Bristol.
.
They are swiftly earning a reputation as one of the south westâ€™s most exciting new bands.