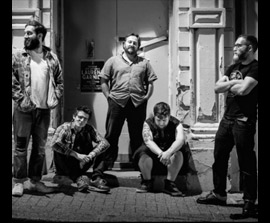 Hailing from the rocky coasts of Brighton, it is no wonder Come The Spring offer nothing short of a unique, fresh and huge sound that comes straight fresh from their sea breeze filled lungs. Becoming a unit in mid 2012, the quintet are still a new name on the market but in such a short space of time have covered a monstrous amount of ground as they chug forward delivering an emotionally charged pack of self crafted songs that without a doubt as a package can only be described as non stop anthems.

The collective have wasted no time in hitting the touring circuit on a National level, unleashing high energy performances, formed from previous members of a host of bands including Rydell and Strength Alone, what this brings to the table is nothing short of experienced musicians who have shared stages with a host of their influential peers including Hot Water Music, Green Day, Braid, Texas is the reason, Appleseed Cast, Piebald, No FX, Samiam and many more.

The bands new release â€œReviveâ€ which will be available worldwide via Engineer Records from late March is packed with post hardcore anthems that will have you falling in love from the get go. Only a fool would bet against Come The Spring being at the top of their game very soon.