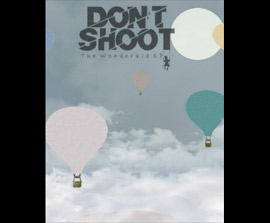 Donâ€™t Shoot are an exciting 5 piece indie / alternative rock band based between Northern Ireland and Glasgow.

In 2013 Donâ€™t Shoot created quite a stir in the NI local music scene with the release of their 4 track EP â€œPleaseâ€, gaining them regular slots with well known NI bands such as Empty Lungs, Making Monsters, abandcalledboy and Hologram. They were also contenders in the Red Bull Bedroom Jam, the only band in Northern Ireland to go through to the knock out stages of the competition.

In 2014 Donâ€™t Shoot have continued their run of good form landing support slots with big names such as More Than Conquerors and Gascan Ruckus. In July Don’t Shoot released ‘The Wonderkid EP’ which got high praise from such reviewers as BBC Across The Line, Chordblossom and BandsNI.

Off the back of The Wonderkid EP Don’t Shoot entered Glasgow’s ‘Soundwave Music Competition’ and after storming through the heats, they played the final at Glasgow’s O2 ABC on the 10th of January 2015 and were announced winners on the night.

“This EP should come with a warning, one listen to this and you’ll be hooked” – Michael Chapman – Chordblossom

â€œFor a band who are both relatively new and irritatingly young, itâ€™s impressive this track (Panic) is very much the finished product. Catchy, welcoming and flawlessly presented, theyâ€™re ready for a big step forward.â€- BBC Across The Line

â€œThis is feel good rock music and the group leave their fans satisfied after a playing a very tight and impressive set.” – Gig review from ‘bandsni.co.uk