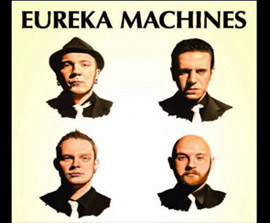 Eureka Machines started out in 2007 when singer Chris Catalyst (occasional guitar/bass wrangler for The Sisters Of Mercy, Mariachi El Bronx, Ginger/The Wildhearts, The Dead Pets and AntiProduct) got bored of waiting for Godot so decided to start a new band. We thought people would like silly names like Wayne Insane, Davros and Pete Human, and some of them did. We did loads of brilliant gigs with bands like Electric Six, Gogol Bordello, The Stranglers and The Wildhearts, as well as Reading/Leeds 2008, which was a laugh. We also played in Mansfield.

We released an album called Do Or Die (WRATHCD48) in 2008 which had some nice reviews from people like The Sun (â€˜power-pop perfectionâ€¦ a dazzling debutâ€™), Spin Magazine (â€˜locating the sweet spot between 10cc and Green Dayâ€™), Classic Rock (â€˜power-pop stompâ€¦ brilliant vocal harmoniesâ€¦ ridiculously catchyâ€™) and Rock Sound (â€˜you wonâ€™t hear bigger, better or more lavish pop songs than these this year â€“ fact!â€™).

We had the song â€˜The Story Of My Lifeâ€™ included on the Classic Rock covermount CD in November 2009, which netted us another six or seven fans.

Weâ€™ve put out videos like this one for Being Good Is Okay But Being Betterâ€™s Better, and this one for Everyone Loves You. Our most favourite is this one for These Are The People Who Live In My House. We agree that our song titles are too long.

This about sums it up: â€˜Imagine if the Beatles and the Beach Boys met Motorhead, jammed with the Cardiacs and created the best band youâ€™ve never heard. Until now.â€™ (Rob Wright, Sandman Magazine).