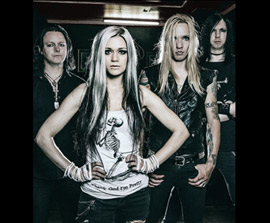 How often do you come across a rock band which has that something, you canâ€™t put your finger on? Forever Still is just that and a whole lot more â€“ a completely honest and emotional in-your-face rock band with no excuses. Vocal powerhouse Maja SchÃ¸nning is backed up by the greatest rock band Denmark has ever seen, and the group comes with intentions of mesmerizing the entire world. The question is. Are you ready?
.
Combining melodic rock with the heavier strains of metal, and a touch of electronic elements, Forever Still has created an original and edgy, yet strangely familiar rock sound, adding a breath of fresh air to the international rock scene. Like it or not, Forever Still is here to stay.
.
The band formed back in 2010, when they decided it was time to give the music scene what is lacked â€“ artists who are not afraid to be completely vulnerable and put the whole truth on the table.
.
Mikkel Haastrup is a trained recording engineer by no other than Flemming â€œMetallicaâ€ Rasmussen and has worked with several of Denmarks best selling artists. This makes the band capable of delivering extremely high quality studio recordings and, most importantly, be fully in charge of their own unique sound. Besides having taken on writing, recording and mixing the music themselves, the band also create their own music videos, all together giving a completely honest representation of the musicians behind it. In February 2013 the band independently released their first official EP â€œBreaking Freeâ€, which was extremely well received by both fans and critics. Every song on the EP is accompanied by a music video, and there are already several videos in the works for the upcoming album incl. one for the lead single with an appearance from a well known Danish actor.
.
Following their release the band got to play the biggest, Danish rock festival, Nordic Noise, and earned themselves the top spot on the Reverb Nation Danish Rock Chart as well as being played on the no. 1 Danish rock radio, myROCK. Currently the band is in the studio with their debut album, and looking forward to go on tour after its release, spreading the word with their full throttle, high energy stage shows.
.
If you think that youâ€™ve heard all that female fronted rock has to offer, you couldnâ€™t be more wrong. But if youâ€™ve made it to the end of this page, thereâ€™s a pretty good chance you donâ€™t think so either.