Home  artist  FRANCO AND THE DREADNOUGHT

FRANCO AND THE DREADNOUGHT 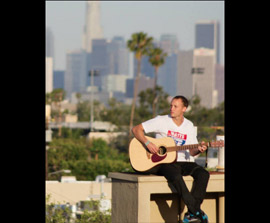 Franco and the Dreadnought is a solo project combining Franco’s heartfelt vocals and songwriting with his Dreadnought acoustic guitar. This lad from Manchester, England has the goods and the capability of packing arenas full of people waving their hands in the air and singing along with every fibre of their being.

It is awe inspiring to hear an acoustic song such as â€œLast Man Standingâ€ convey the sweet, melt your heart sentiment of Damien Rice while creating the same emotive impact as the arena rock of The Kings of Leon. His singing and playing exude confidence and while making no attempt at covering up his English inflections, his delivery is all the more real and raw.

Supersonic Media (british record label) have signed Franco to release 3 singles at the start of 2016. They are currently doing promo work to build the hype which will include 2 free download singles

Franco is no stranger to success and as a testament to the power of his musical ability, he was asked personally by Desmond Tutu to write a song celebrating the life of Nelson Mandela. The archbishop gave the song entitled “Inyaniso” (translation – “Truth”) as a gift to Mr Mandela for his birthday.