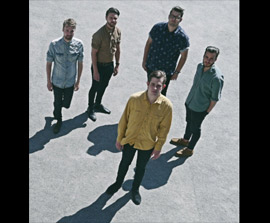 From scattered English Counties, the band members of Affairs all met at Hull University, drawn together by their mutual appreciation of great music, art, slick hair, tight jeans and loose hips. Affairs are a well-dressed quintet, who have garnered a reputation for their ethereal and theatrical live performances, considered lyrics and hooky, alternative synth, pop / rock style.

Their music contains elements that are simultaneously uniquely modern and nostalgic, as laptop-made samples and loops combine seamlessly with vintage Rickenbacker guitars and dramatic vocal style â€“ creating a sound that has been described as â€˜audible chocolateâ€™.

Comparisons have been drawn to artists as diverse as Foals, David Bowie, The Smiths and Frank Sinatra, with James Moore â€“ Independent Music describing the bands sound as â€œSomewhere in between The Smiths, Joy Division, Interpol, and modern indie rock, Affairs are a very interesting new five-piece from the UK. The word has been spreading fast about this young band with a classy soundâ€

Aaron Phillips, from Amazing Radio described Affairs as
â€œElectro Pop, fused with Guitars and vocals Morrissey would be proud ofâ€
Affairs have recently played with the likes of Alt-J, Circa Waves, Dog Is Dead, Coasts, Nothing But Thieves and JAWS. They can count on Tom Robinson, Alan Raw and Aaron Phillips for support.