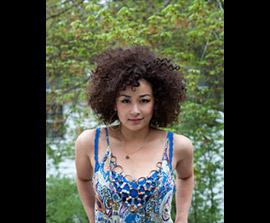 Ilana J excelled in classical piano at a young age, but her dream of a future in the music industry was shelved for a more traditional education and career path; that is until a long hot summer a few years ago in Maine, when she found the inspiration she needed to open her heart again to her music. Ilana dived in with intensive musical training on both the guitar and the piano, and almost immediately began writing songs, as if the lyrics and music had just been waiting to be heard.

After 18 months of hard work, supported every step of the way by her friends and family, a chance meeting in 2013 with Mark Alexander, ex-keyboard player with Meat Loaf, gave her the final push she needed to follow her dream. It was time to start recording her songs.

Since beginning her recording journey Ilana’s musical style has evolved naturally and, with producer Mark, she has been busy recording all her own original tracks in a home studio, which has not been without its challenges. Her contemporary musical heroes are Sia, Colbie, Callait and, in particular, Ed Sheeran because she “loves his unique musical style and he’s a super-talented singer/songwriter”.