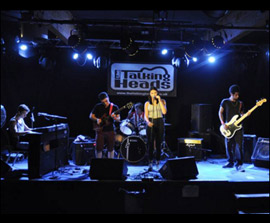 Hailing from sunny Southampton, Insomnia have been wowing audiences with their highly energetic, rhythmic and melodic brand of rock since 2013. This year has been a typically enthusiastic start and they already have bookings in prestigious venues such as the Railway Inn in Winchester, the Joiners in Southampton and the Beggars Fair in Romsey. They are also through to the final of the Southampton Battle of the Bands as promoted by the legendary Jurassic Mark at Talking Heads.

The band’s influences are too multifarious to list but with a line up comprising both male and female vocal talents, guitar, bass, drums and piano, Insomnia play a killer set of their own quirky songs as well as a few well chosen and energetically delivered covers. They are currently recording their first album which will be released in the summer..