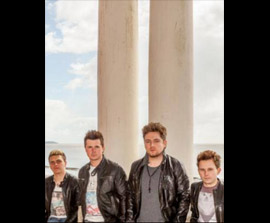 Formed in 2001 4th Street Traffic has had a true apprenticeship in the unsigned music industry, where most bands have long lost the belief in their dream, 4th street slogged it out and the hunger has grown stronger.

The release of the Debut album â€œWake Up Callâ€ sold a massive 3000 hard copies to a fan base that grew overnight, with this support and overwhelming reaction the path was set for a great future, following the release the band set a 15 date uk tour and were creating a buzz. Local radio station Red Dragon FM (Now Capital FM) saw something exciting and invited the band to perform â€œParty In The Parkâ€ 2005 in front of a crowd of 25,000.
After a string of EP releases they created a second Album titled â€œKick the habitâ€ at Long Wave Studios, with producer Romesh Dodangoda, who had produced for Manic Street Preachers, Kids in Glass houses, Funeral for a Friend, Twin Atlantic among many other great bands. It was the game changer, this album was picked up by Kelly Jones and Richard Jones of Stereophonics which lead to the band being invited to open up the Summer In The City concert in Cardiff City Stadium to a sell out of 30,000.
Kick the Habit went on to sell well in excess of 6000 copies in hard copies and online downloads, it continues to sell strong to this day and the success of this year alone shot the bands profile up dramatically. With an incredible foundation in place the bands status grew and they became more popular with promoters across the board making the call work with them, the support slots came rolling in with some fantastic headliners such as Electric Six, Toploader, The Darkness, Mike and the Mechanics, The Stranglers, 10CC, Dodgy, We Are Scientists, Scouting For Girls, The Felling, The Enemy and list goes on.
Late 2013/2014 after literally a year of solid grind to fund studio time the band went back to Long Wave Studio to finish off the tracks for the 3rd Album â€œClaim To Fameâ€ prior to this 3 singles were released off the album â€œLong Way Roundâ€ â€œBitter Sweetâ€ and â€œGolden Girlâ€ all having a fanatic response. The months following have been totally dedicated to touring, hitting the festival circuit and promoting as much as physically possible.
Make no mistake 4th Street are one of the Hardest working and most dedicated bands out there, with a work ethic to rival the biggest names on the planet, passionate, persistent but patient, they will never give up.