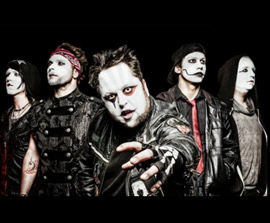 One of the fastest growing bands in the north of England with fans now travelling from far and wide, A Joker’s Rage, fronted by clown-in-chief Zakk Taylor, have a winning mix of powerhouse rock, hugely memorable tunes and a delivery not unlike being trampled by a herd of dinosaurs with their hemorrhoids on fire.

One minute the crowd’s moshing, the next they’re headbanging. Give it five minutes and they’re bouncing up and down. Take your eye off ’em for a second and next you know the whole heaving mass is waving their arms and singing along. Ah yes . it’s called having a bloody good time!

It’s a party, it’s celebration of great music, IT’S A PROPER ROCK SHOW and, let’s be honest, when did you last see one of those when you weren’t a mile from the stage and paying fifty quid for the privilege. You might have caught them blowing bigger and ‘better’ bands off stage, or storming a 2000 crowd supporting The Darkness. Whatever, you’re either a convert or about to be..