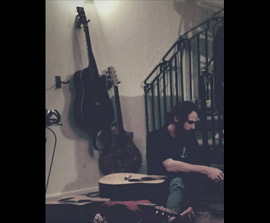 Ted Clark is a singer songwriter who started out playing Hard Rock, and has through his life tried a variety of styles of music from Death Metal to Classical and Flamenco. Now he has found his feet.

Born in Liverpool in the UK, Ted now lives in Kent, the Garden of England. His music is now a blend of Folk and alternative soundscapes, creating beautiful melodies to send you on a journey of your own, divulging thoughts and experiences through the medium of song.
You can now catch him performing in the UK, joined by Violin genius Paul Brasington, and with his debut release ‘Angles of Elevation’ Ted Clark is set to be a star.
‘Angles of Elevation’ is available to purchase, and Ted is currently working on his next release ‘A Mere Formality’, which will be finding its way to you very soon!