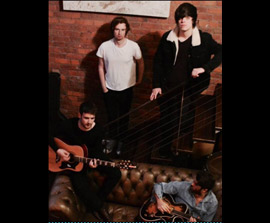 The Reveurs are a four piece Manchester based rock/indie band whose sole purpose is to write and perform anthemic tunes that will stick in your head.

â€œAs they state on their Facebook page their sole purpose is to; “write and perform anthemic tunes that will stick in your head.” And that is something they have achievedâ€œ

Formed in late 2013, the band consists of Gary Nelson (Vocals/Guitar), Iain Brewster (Guitar/Backing Vocals), Adam Molyneux (Bass) and Ben Devenport (Drums), combining their musical inspirations and talents to come up with a sound and style that is an intense, unique and lyrically exciting audio journey.

â€œThey only formed towards the end of 2013, however, theyâ€™ve made a good start and provided an impressive set. They played to arguably the biggest audience Iâ€™ve seen in Night and Day since the end of last year as well, bringing with them many fans who got right behind them,
The Reveurs will grow and are well worth seeing live, as they establish themselves, they can only continue to get better.â€

Channeling musical influences of bands such as Kings of Leon, Arctic Monkeys and The Strokes, The Reveurs are reminiscent of situations that we have all found ourselves in, carefully mixing narrative like lyrics with heavy solos that allow the instruments to speak volumes.