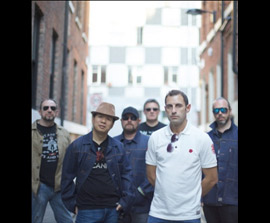 The Rubys released their debut album “Limelight Parasite” in 2012, which was recorded at Vibe Studios â€“ where New Order had recorded previously. The album was produced by Manchester legend Martin Coogan (The Mock Turtles) and the prodigious new talent of Dean Glover (Skeleton Suite/Young Myths).
The album proved to be a breakthrough in the US, garnering The Rubys first US #1 on Philadelphia’sâ€™ SRRocks.com Countdown Chart with the track â€œAfter Allâ€. The single would go on to record three weeks and two visits to the top, followed by a further three #1 singles in quick succession.
The Rubys hit the road on the â€˜Limelight Parasite Tour 2013â€ with a critically acclaimed show at Dry Bar, Manchester, followed by gigs at The Good Ship in London & The O2 Academy, Birmingham.
Future plans for the The Rubys include the recording of a second album with Martin Coogan (October 2014), the prospect of more tours & Festivals in 2015, and a long heralded US Tour.