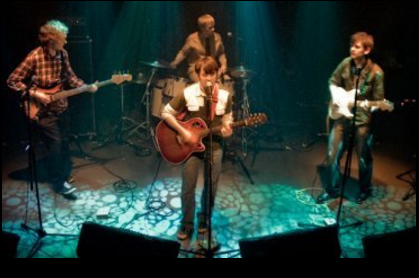 The Watanabes are an international indie folk pop band performing and recording in Tokyo, made up of two British brothers on guitar and vocals, and a Japanese rhythm section. They enjoy drinking banana juice together and are keen students of Ikebana. The group began life in the orange-laden prefecture of Ehime, and named themselves Watanabe in tribute to the warm and friendly people of the region, whilst also alluding to The Smiths. The initial inspiration however came from Toru Watanabe, the slightly troubled and over nostalgic protagonist in Haruki Murakamiâ€˜s novel, Norwegian Wood.

Three years later, the band packed up and shifted to Tokyo in search of new inspiration and regular trains, where they began work on their debut album â€˜Independent Social Powerâ€™. When their work was complete, they popped a CD in a package and sent if off to Japanese indie label BabyBoom Records, who liked it so much that they offered to distribute the record at music stores across the country. The album caught the attention of Japanese indie music magazine Cookie Scene, as well as the BBC, who described their work as â€œpure Indie, with floating verses and catchy chorusesâ€.

â€‹The Watanabes released their 5 track EP â€˜Draw What Youâ€™ Like at major record stores across Japan and worldwide as a digital download on 29th September 2014. The record has already received airplay from BBCâ€™s Mark Forrest, Amazing Radioâ€™s Beth Elfyn, and InterFMâ€™s Guy Perryman, and gained positive reviews from Metropolis Magazine (Japan) and Music Connection Magazine (U.S.A). Three of the tracks have been aired on CNN International as part of a TV documentary on Japan.