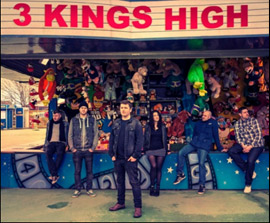 Hailing from Bristol, Three Kings High is the sound of your record collection, mashed up into an electric live band experience. From a hip hop background, riff heavy indie band Three Kings High combine powerful melodies with intelligent delivery to make an original but familiar sound.

Inspired and influenced by Bristolâ€™s diverse musical culture, the Kings are putting their own stamp on the city and are showcasing this fresh new sound around the country, leaving a tidal wave of energy behind them wherever they go.
Off the back of the successful, and critically acclaimed â€œTell Em Liesâ€ EP, released via Reel Me Records in 2013 on 7â€ Vinyl, CD & DD, the demand and momentum of TKH has never been greater, heading into 2014 with their first headline tour of the UK, and some great support slots coming up.
Three Kings High have also supported established acts like Huey Morgan, Smoove & Turrell, The Milk, The Apples, The Pharcyde & Craig Charles, playing main stages at Brisfest & Redfest, the Nokia stage at Brisfest 2013, as well as other festivals throughout the summer months. They have been championed by BBC Bristol as ones to watch.