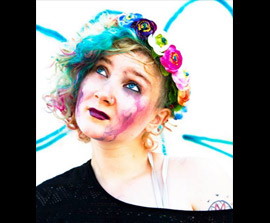 Annie Woodward is a grunge folk-rocker born and raised in Scandinavia who originally set out to write lyrics for other bands.
.
Through her projects in theatre, Annie found her own voice in music and has been performing ever since. She has played two independent tours, one European and one in Northern America.
.
Her first album, “2 Faces on a Clown”, was recorded with producers in Los Angeles and Boston and will see its light in early 2015.
.
The first single from “2 Faces on a Clown”, “Eager to Talk” debuted on Norwegian national radio this summer and is available on her Soundcloud page.
.
Annie continues to feed her curiosity in music experimenting with grunge, punk and electronic vibes and putting her music in new corners of the world whenever she can.