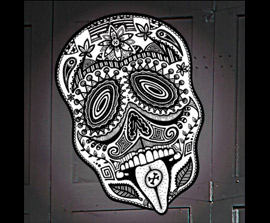 Get ready to skank, pogo, mosh, jig, polka and maybe even waltz â€“ The sound of Counting Coins refuses to stay still, switching from ska punk to gypsy to hip-hop and back again several times in the same song. Since forming in 2009, Counting Coins have steadily built up a reputation round their raucously energetic live shows for stealing the spotlight and getting the crowds bouncing, whether itâ€™s a headline or a support slot, they want everyone to have a good time and refuse to take no for an answer!
After the success of their 2010 release â€œTake the Rideâ€ and 2013â€™s E.P â€œReach for the Skyâ€, The coins boys have been on a constant rampage across the UK and Europe tearing up support slots with Melt Banana, Sonic Boom 6, The New Town Kings, The Talks, Jaya the Cat, The King Blues, Random Hand, The JB Conspiracy, Neville Staple (The Specials), Babar Luck (King Prawn) and The Stiff Joints, alongside The Cat Empire and NOFX amongst many others, and Smashing up festivals such as Boomtown, Rebellion, Tramlines, Galtres and Freedom Festival along the way.
No enemies, no strangers â€“ GET INVOLVED!