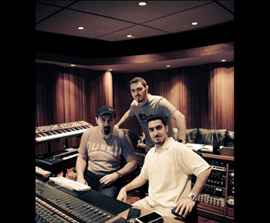 Welcome to the world of Authentic Bros! Consisting of multi-talented brothers, Babak, a Sound-Engineer (Vocals, Mixing, Beats, Production), and Reza, a Video-Producer (Vocals, Beats, Visuals), the duo have been steadily forging their own unique brand of multidimensional, emotive urban soundscapes. Born in Ahvaz, Iran and raised in Birmingham, England on a diverse palette of influences ranging from commercial big-beat rap, explosive indie hip-hop, grime, drumâ€™nâ€™bass, Râ€™nâ€™B, dance, reggae, ragga, dubstep, reggaeton, classical and modern Arabic, Persian and Turkish music, the duo searched extensively for a creative outlet to realise their ambitions of fusing these base elements into a new breed of music; creating a new vision and a new sonic journey for the people of the world.

The duoâ€™s form of art revolves around life and humanity, from spiritual to physical, love to hate, war to peace and home to streets, with versifying minds the duo emanate unconventional sounds and visuals elaborating a conceptual creation of art. The sound of Authentic Bros is hard to pin down and difficult to pigeonhole. They deftly craft a propulsive fusion of intricately programmed beatscapes and futuristic twinkling melodies, which utilise a twist of different genres. A keen interest in challenging music and a disdain for formulaic beat-crafting has led to the creation of multilayered soundscapes which refuse to follow norms, instead growing to epic and cinematic proportions and/or shifting direction with no notice. Vocally, the duo spit bars ranging from medium-tempo wordsmithery to high-octane doubletime wizardry, and these styles tend to be fused together with swift switching techniques and are occasionally interspersed with poignant Râ€™nâ€™B harmonies.